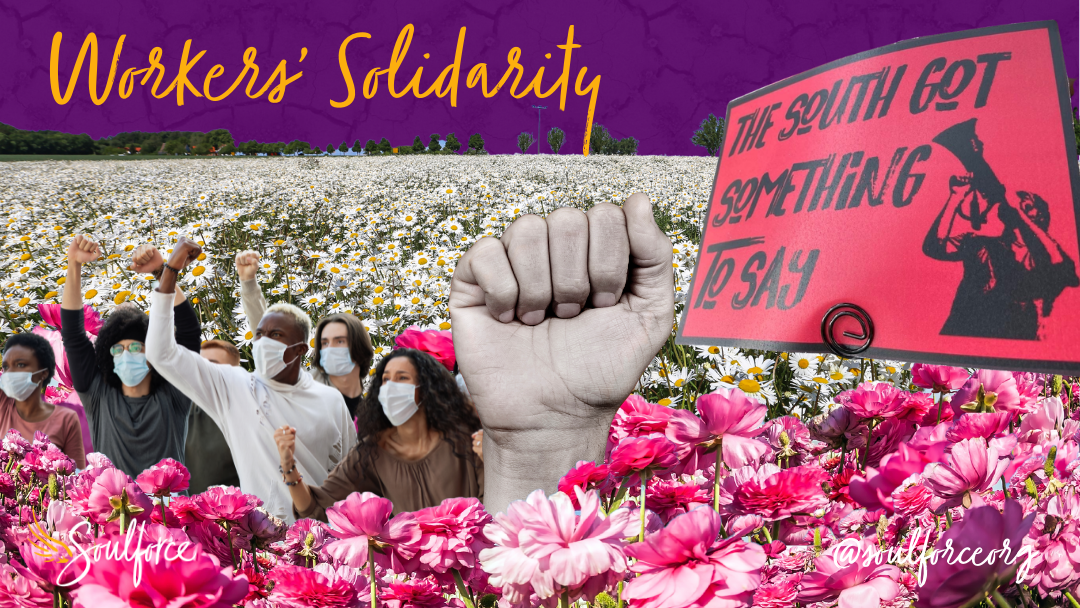 On May 1st, millions of workers will celebrate International Workers Day, also known as May Day. May Day is a time of celebration, it’s a day when we reflect on the arduous struggle of countless labor rights activists who paved the way for the eight hour work day, paid sick leave, vacation time and other employment benefits once denied to workers internationally. Though the labor movement has secured many important victories since its inception in 1886, there still exist many systemic injustices that plague workers around the world. For this May Day, it’s important that we take into consideration the ways in which white Christian Supremacy has sought to destroy the labor rights movement.

So what is the exact relationship between white Christian Supremacy and labor? white Christian Supremacy is the structure through which oppression is moralized through the distortion of theological doctrines. When we look at the way this plays out today, it’s clear to see that conservative evangelicals utilize Biblical literalism to sow seeds of division amongst workers.

Biblical literalists tend to have a disdain for worldly struggle, especially the struggles of oppressed communities that seek to fight for liberation. Hypocrisy is at the core of white Christian Supremacy and the utilization of Biblical literalism for the benefit of capitalism. This hypocrisy is best demonstrated when we recognize that subscribers to this worldview are very selective about the parts of the Bible they take literally.

The labor movement is only effective insofar as the workers of that movement are unified. In order to curtail this unity, white Christian Supremacy uses scripture such as 2 Corinthians 6:14 — “Do not be yoked together with unbelievers. For what do righteousness and wickedness have in common? Or what fellowship can light have with darkness?” — to discourage the collaboration of believers and non believers within labor movements.

It’s through this white Christian supremacist narrative that we workers are led to believe that we must submit to servitude, as we are all serfs and servants to God. We are called to find holiness and piety through suffering righteously to our economic conditions referenced in scriptures like these:

Ephesians 6:5-8:  “Servants, be obedient to them that are your masters according to the flesh.”

Colossians 3:22-25:  “Servants, obey in all things your masters according to the flesh.”

It’s in bearing the suffering of economic injustice that oppressed workers are told they’re able to share in the bearing of the cross of Christ. This sort of scriptural manipulation is the foundation of white Christian Supremacy’s role in maintaining capitalism’s influence over the world. What’s interesting about this narrative is that it purposefully disregards scripture that speaks out against oppression, the scriptural call for justice, and the safeguarding of human dignity!

What should be abundantly apparent at this point is that theology isn’t politically or economically neutral. It’s no coincidence that theologies that demand worker submission and obedience to oppressive economic systems are mainly pervasive within countries that benefit from those types of economic injustices. How is it that Biblical literalists don’t take scripture literally that condemns oppression? How does the Biblical literalist respond to Psalm 72:4 which reads “defend the cause of the poor of the people, give deliverance to the children of the needy, and crush the oppressor!” or Jeremiah 22:13 that reads “Woe to him who builds his house by unrighteousness, and his upper rooms by injustice, who makes his neighbor serve him for nothing and does not give him his wages”?

After all, within Christianity there exist various political and economic theologies that determine the nature of a social group’s worldview. One need only look to the liberation theologies of Latin America and other countries ravaged by the extractive economics of the West to see that theology is often determined by the material social and economic pressures that exist within those societies.

Though it should be understood that certain passages within scripture have specific contexts for which they were written, this does not change the fact that scripture does not speak or act of its own accord. When it comes to the material conditions of society, the economic realities that we’re all subjected to, and the continued oppression of workers worldwide, the narrative that oppression is scripturally justified must be deconstructed. On this May Day we reflect on the continued violence committed against oppressed workers across the world. It’s in recognition of this suffering that we both celebrate our victories and prepare for the many struggles to come. Despite the divisiveness sowed by white Christian Supremacy, we continue to foster a radical spirit of solidarity and continually renew our commitment to the liberation of the oppressed and the advancement of organized labor.