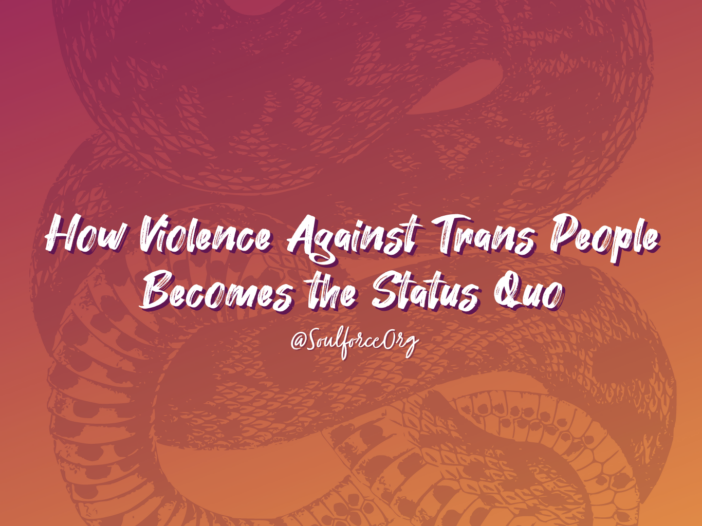 As a gender nonconforming queer person from a military family, this has been a rough week for my people.

I have deep political and spiritual convictions that call me, personally, to demand an end to our military industrial complex. That conversation is deeply nuanced and complicated for me. And, at the same time, the rumors this week of a ban on trans people joining the military has also taken me way back to my childhood, being raised slightly-off base in a military town.

Growing up, I learned some basic lessons in kindergarten with the other Army/Navy kids. Lessons like: It is never acceptable to tell someone they don’t belong, or hurt them, just because they are different than you. If someone else is being bullied, you stand up for them. Everyone you meet is someone’s child, partner, parent, friend, or sibling.

Our Trans family has experienced some deep hurt this past week:

Why is this kind of onslaught of hate ever acceptable in a society that prides itself on its diversity and tolerance? Why would people treat each other in ways most kindergarteners would find reprehensible?

The only way to make violence against our communities – physical, emotional, economic, and spiritual violence – “acceptable” is to make us unacceptable through painting us as deviant, immoral, and dangerous.

Because Christian Supremacist logic is based on extreme binaries (everything is black or white, good or evil, right or wrong, etc) and the idea that order (rather than chaos) is the ultimate sign of goodness and godliness. Anything that falls outside precisely “male” and “female” is considered morally reprehensible.

Ideals of what is called “Biblical manhood and womanhood” aggressively organizes all humans into two very small boxes that reinforce patriarchy and heterosexism. Everything else is an “indoctrination by liberal politics” or a “distortion of God’s intentions” (Focus on the Family, 2017).

That is the kind of spiritual violence that makes it socially acceptable to joke about the murder of Trans Women on national radio, or to nonchalantly tweet out the ban of a whole group of people from an arm of the government.

At Soulforce, we’ve just finished our first-ever session Vacation Bible School, created for LGBTQI Youth to unpack the messages we receive about ourselves and reclaim our spirits in an online learning community.

In our four-week course, two sessions of 19 LGBTQI people studied the wild and wonderful diversity of creatures who defy the gender binary that we as humans have assigned to them, and paired those lessons with Bible stories that give us a queerer perspective on scripture.

Spending time with other Trans and Gender Nonconforming folks, cherishing stories like that of male seahorses who give birth to their young, or the queer reading of Joseph and the Coat of Many Colors, changed my understanding of what is truly natural, sacred, and possible for me and my people.

And it reminded me that we have to seek out, with our full spirits, the things that give us life as LGBTQI people, because we will be otherwise pummeled by the vitriolic messages coming at us from the Right Wing.

Now, many political analysts have tried to assure us that 45’s tweets are just political grandstanding, and that Texas’s SB3 will never make it past the Senate. Regardless, these events show that there is a status quo in place that accepts this kind of discrimination as par for the course.

Dehumanizing Trans and Gender Nonconforming people like me is incredibly dangerous, because it re-affirms that our bodies and our communities are unnatural, scary, burdensome, inappropriate, invalid, and ultimately less than fully human and fully sacred.

This blatant violence against our most vulnerable communities is what comes when discrimination is just allowed to BE. We will not sit idly by when a barrage of hate visits itself on our people.

This is exactly the right time to be in solidarity with each other. For us to show up and say NO to spiritual and physical violence. And if it doesn’t come from our leaders, our politicians, or our media, our then it has to come from the ground up – from all of us.

Some of the things we in Soulforce are doing this summer to resist violence are:

Thank you, always, Soulforce family, for joining us in political and spiritual resistance.