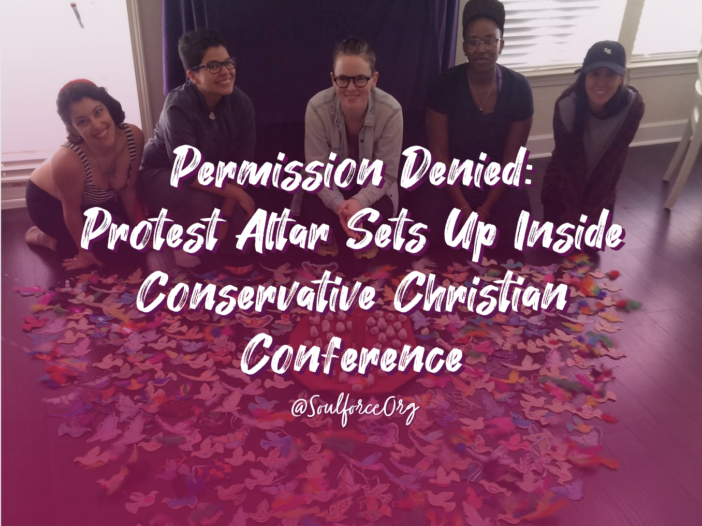 Orlando, FL, February 27, 2017 – Lesbian, gay, bisexual, transgender, queer, and intersex (LGBTQI) direct action group Soulforce is heading to the host hotel of a major conservative Christian communications conference, the National Religious Broadcasters (NRB) Proclaim 2017, and neither the hotel nor the event organizers happy about it.

The NRB is a global leader in conservative Christian broadcasting with 1100+ members and an international audience of millions around the world.

“The NRB presents itself as the infallible arbiter of all things Christianity in its statement of faith, which focuses primarily on sex,” said Yaz Mendez Nuñez, Soulforce Programs Director.  “The Proclaim conference is where they gather each year to drive the message home that Islam, feminism, and the LGBTQI community are dangerous to their God. As a person of faith, I refuse to believe that.”

Soulforce and its local partners and activist members are setting up a “Living Altar of Resistance” inside the hotel tonight, an altar made up of over 400 doves decorated by supporters around the world. They intend to hold round-the-clock vigil for the duration of the conference.

“I am passionate about this because hate has already come into our city and shot down 49 people, while injuring 52 others.  Hate tried on June 12, 2016 and now hate is returning to our city.  Love wins, however.  Love always wins,” says local Rev. Terry Steed Pierce of Joy Metropolitan Community Church.

Time: Email for this sensitive information.

The activists are committed to continued vigil after the launch until forcibly removed, and the host hotel has promised to remove them. It is yet uncertain whether those steps will include arrest.

“The NRB has blood on its hands. They create the conditions that make our community a target of violence,” stated Rev. Alba Onofrio, the group’s spiritual strategist. “In Orlando, where the LGBTQI community is still reeling from the violence done at the site of the Pulse Massacre, it is an affront to our human dignity to have such a hate-based conference here.”

The doves have shipped in from LGBTQI and allies people across the country in solidarity with the Orlando community and in remembrance of the 49 Latinx people lost at the Pulse Massacre.

This is not the first interaction between the activist group and the NRB. The NRB and host hotel had the activists removed after they interrupted the keynote address from Rick Warren at Proclaim 2016. The NRB updated their policies in response to include explicit rejection of transgender and gender non-conforming people the day after.

Community members are invited to join the protest, as the group intends to be present all week inside the hotel, though Soulforce has formally been told they are not welcome to conduct their protest activities. The security has assured the activists they will be removed from the premises.