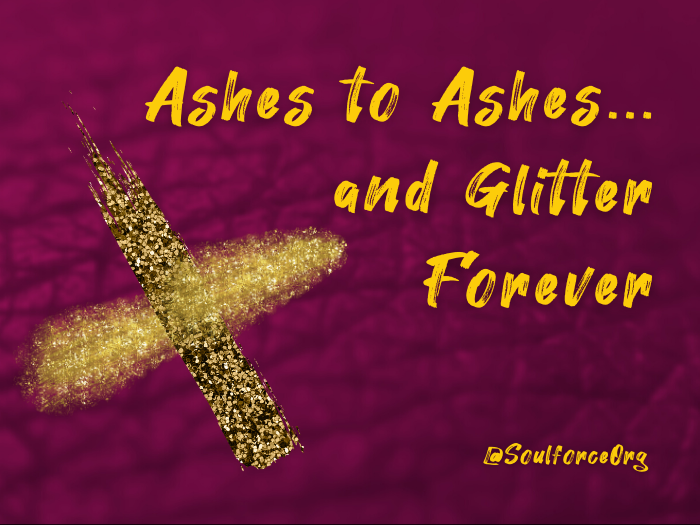 Glitter is a symbol inseparable from our Queer history. Countless ancestors have adorned themselves with glitter at Pride parades, drag shows, and just to make us happy in our day-to-day lives. Glitter is emblematic of our utter fabulousness and shine (though we concede that some folks in our community detest it with as much passion as others of us love it). Its notorious staying power is also a reflection of our tenacity as a people. (Can you ever get glitter out of anything? Not really.)

Today we celebrate the LGBTQ+ Christians who you may see rocking a glitter cross on their foreheads because of Glitter Ash Wednesday, organized annually by Parity NYC. They call this movement a proclamation and reclamation of faith, and for me, it also represents a beautifully powerful protest statement to any who would try to deny the validity of a Christian identity for LGBTQ+ people.

Ash Wednesday is one of the most popular and important holy days in the Christian calendar marking the beginning of the Lenten season, a time geared towards spiritual introspection and self-work. The traditional ashen cross reminds us that death comes for us all (ash to ash, dust to dust), and it literally marks us as part of a collective body of believers.

For Queer and Trans people, the precarious and precious nature of life is often all too real. We as Queer People bear “marks”, often not of our own choosing, so acts of self-pronouncement through things like glitter, drag, and queer campiness, are ways that we can “come out” and name and reclaim ourselves.

Combining glitter and ash on Ash Wednesday is a powerful statement: In mixing these two distinguishing markers of Queerness and Christianity, we proclaim that the identities and faith of Queer Christians are authentic, and that the ways we express ourselves and our lived realities won’t be suppressed.

To me, the cross that resembles an “x” on one’s forehead reminds me of an X that marks the spot of our pain, our bodies that receive the harm of white Christian Supremacy and incorporates it into our beings. Using glitter to make that X into a queer protest of the wound of Christian Supremacy on our bodies, says, “This mark that is supposed to represent belonging to a body of people, the Church, marks our exclusion from this belonging because of this other identity that is also freely given by God.” In the act of bearing the glitter ash cross or X, we name ourselves and the wounds of the exclusion and spiritual violence of the Church, and we protest the ways we have falsely been marked as wrong, evil, outside the family and the will of God.

In James Cone’s book, The Cross and the Lynching Tree, Cone posits that until we theologically understand the sacred bodies that are being crucified on the Cross today – Black bodies, Queer bodies, immigrant bodies, women’s bodies – then we won’t be able to truly understand this thing called the Cross, or the Christ. We need to understand that the institutions and ideologies of Empire that crucified Christ are the same powers that are crucifying marginalized bodies now.

As someone who identifies as a Queer Latinx Feminist and a Christian I imagine myself adorned in glitter ash in an act of resistance to the systems that tell me I cannot exist; that my body is not welcome, that my soul does not belong the faith that raised me. And at the same time, I am naming the wounds that come from the violence stemming from the collusion between the State and Christianity and the Church, and I am naming my truth and my most authentic (and fabulous Queer femme) self. There are many of us. We continue to grow in numbers and audacity as we carve out space for Queer Christians and lay claim to our own sacred bodies and truths. We will not be silenced, and we will not uphold the white Christian Supremacy that kills our bodies and our souls.