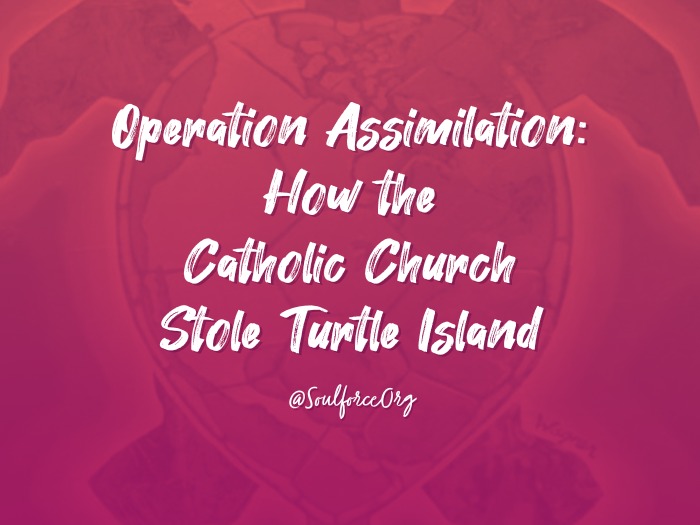 As the single largest landowner in the world, the Catholic Church has made billions of dollars through stealing from and exploiting Indigenous people globally.  This is money that can and should be used to fund language revitalization programs and pay for infrastructure that has been denied to Indigenous communities as the result of papal bulls, including the Doctrine of Discovery, that declared us without souls and therefore not human.

But instead, in July of 2022, the Catholic Church sent Pope Francis to Quebec City to apologize for the Church’s role in the Federal Indian Boarding Schools.

An apology from the Catholic Church was only one of the 94 calls to action from the Truth, Justice and Reconciliation Commission, and it wasn’t even done adequately.  Pope Francis’ refusal to denounce the Doctrine of Discovery further perpetuates 500 years of erasure and violence that normalizes the dispossession and dehumanization of Indigenous peoples. By upholding the Doctrine of Discovery, the Catholic Church is telling the world that Indigenous people didn’t (and still don’t) count as full human beings, and consequently perpetuates the idea that our murders and abuses weren’t really sins.  The Pope’s refusal to address this is disrespectful at best and a part of a calculated plan to uphold white Christian Supremacy at worst.

The creation of the Indian Boarding School was originally aimed at acquiring collective territories by assimilating American Indian, Alaska Native and Native Hawaiian people through Christianization.  The United States government wanted to own the land but as Indigenous peoples, we belonged to the land.  It was where we hunted, where our ancestors were buried.  It was what the Creator gave to us for sacred ceremonies.  It gave us life for both our bodies and our spirits.  This was not something Christian colonizers could understand as the foundation of their religion was in wine/water and bread which could be made sacred and transported anywhere.  Our religion was in the land.  To remove us from the land was to erase who we were.

And that’s exactly what happened.

The Indian Boarding School program was implemented for the removal and reprogramming of American Indigenous children. It began with the Indian Civilization Act Fund of 1819 and was made possible by the investment and implementation of 14 denominations within the Christian Church, as listed in the Federal Investigative Report–Catholic, Presbyterian, Quaker, Episcopal, Methodist, Baptist, Jesuit, Dutch Reformed, Evangelical, Mennonite, Protestant, Anglican, 7th Day Adventist and Unitarian.  In the US, there were a total of 497 Indian boarding school institutions, of which 408 were federally funded and/or supported.  This account from the National Native American Boarding School Healing Coalition details what horrors were done to children at the hands of the state and the Church:

“The U.S. Native children that were voluntarily or forcibly removed from their homes, families, and communities during this time were taken to schools far away where they were punished for speaking their native language, banned from acting in any way that might be seen to represent traditional or cultural practices, stripped of traditional clothing, hair and personal belongings and behaviors reflective of their native culture. They suffered physical, sexual, cultural and spiritual abuse and neglect, and experienced treatment that in many cases constituted torture for speaking their Native languages. Many children never returned home and their fates have yet to be accounted for by the U.S. government.” (US Indian Boarding School History – The National Native American Boarding School Healing Coalition)

And though the Catholic Church was responsible for the largest number of schools, it is not the only Christian denomination with blood on its hands.  Thirteen other denominations played a part in this genocide: Presbyterian, Quaker, Episcopal, Methodist, Baptist, Jesuit, Dutch Reformed, Evangelical, Mennonite, Protestant, Anglican, 7th Day Adventist, Unitarian.  This is a legacy of white Christian Supremacy, and addressing it requires solutions from all benefitting institutions – including accountability at the denominational level.

It is no coincidence that a settler colonialist government and missionizing church denominations worked hand-in-hand to commit these atrocities on the Indigenous people of the Americas. Christianity has been stolen and twisted by those in power to justify genocide, enslavement, and domination for a very long time.  In this case, Indigenous people were not seen as civilized (and therefore not fully human) because we were not a reflection of the white European Christians that were believed to be the reflection of God.  Christianization is a coercive missionizing strategy to make a population of people more human in the eyes of colonial powers by converting them to Christianity, systematically destroying Native cultures and communities.  This has been a core tactic of colonization in the Western world for centuries.

It’s also important to note that the papal bulls, which were public decrees straight from the Pope himself, also allowed for the Transatlantic slave trade to continue which the Catholic Church profited from immensely through the buying and selling of slaves who were used as labor to create the Church’s billion dollar industry.  At various moments in American history from the colonial era to the U.S. Civil War, the Catholic Church was the largest corporate slaveholder in Florida, Louisiana, Maryland, Kentucky and Missouri.  Indigenous and Black repression and oppression are completely intertwined.

At its core, the white Christian Supremacist ideologies behind the Indian Boarding School are the same that promote conversion therapy against Queer people. In both experiences, we are told that we are evil or sick because of an innate and essential part of our beings. We are told that our very nature is sinful and offensive to God. We are told that we need to be fixed or changed or healed in order to be redeemed and to earn our personhood and our basic human dignity. And if we cannot or will not change ourselves to fit into their white Christian Supremacist ideals, we are punished and abused and denied our fundamental human rights… and God and the Bible and “morality” are used to justify it.

In contorting scripture and Christian traditions to fit their agenda, the colonizers of Turtle Island have warped Christianity into a false ideology that claims that white heterosexual cisgender Christians are the ideal “Chosen People” of God and therefore it is their responsibility to assure this demographic remains in power – by any means necessary.

At the heart of all struggles for LGBTQI struggles for justice is bodily autonomy and personal sovereignty.  In believing that our body is our own, we have the fundamental human right to control what happens to our body, when and where it happens, and how and with whom it happens.  Conversion therapy strips these innate human rights away and must cease, in all of its forms.

Many Indian Boarding School survivors worked tirelessly for the Catholic Church’s apology and they greatly deserve to feel some sense of relief that it finally happened.  But we can’t stop there.  So much more is needed.  The fatal flaw in “truth and reconciliation” commissions is that it often skips the first step of truth. Even beyond that, reconciliation means to reconcile which implies there were good relations to begin with, which in the case of the US government and Native American tribes there were not. There have never been, and until we address the sins of the past, we never can be.

You can’t unknow this information now.  So what can you do?

First, I strongly encourage non-Indigenous people to not center themselves in discussions around the Pope’s visit and “apology”.  Your religious beliefs should take a backseat to survivors whose voices should be amplified and supported.  There is a resource list at the end of this blog which you can use to have these tough conversations and educate members of your own communities.  More specifically, this is a time for you to have conversations about the Doctrine of Discovery, which is still being used today as the basis for conversion therapy for people in every nation.

Then, learn what land you are illegally occupying.  But please don’t stop at land acknowledgement.  Use that information to dive deeper into local resistance movements as well as calls to actually complete the 94 calls to action.  As of July 2022, only 13 of the 94 calls to action from the Truth and Reconciliation Commission have been completed.  These actions and progress are continuously monitored by Beyond 94.

Lastly, share the Federal Indian Boarding School Initiative Investigative Report.  This report was released in May of 2022 with very little media attention and is the first volume of a truth initiative that intends to continue investigating the scope and impacts of the Federal Indian Boarding School policies.  This 106 page report is core to the struggle for bodily autonomy and is an important part of decoding white Christian Supremacy in this nation.