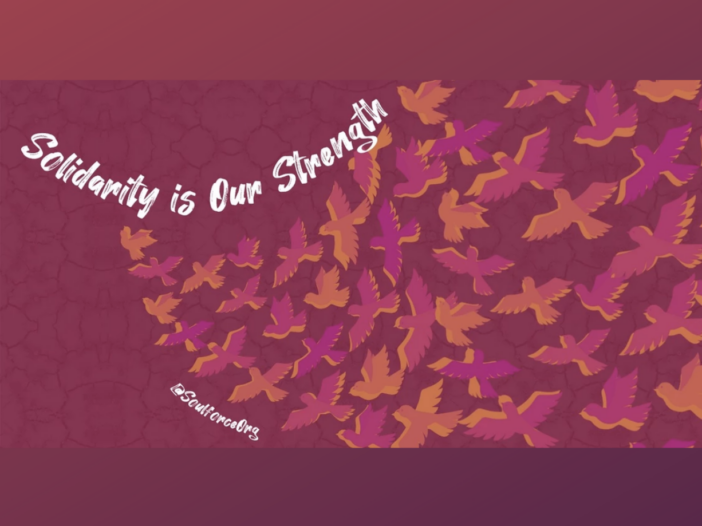 There continues to be a lot to process after the shooting in Atlanta last month. Tragedy and grief continue to stack and yet we trudge forward. Many of us are numb and exhausted and the thought of one more zoom meeting alone is enough to make us want to disappear forever.

It feels easy to become inundated with fear that nothing will change. Tragedy in tow, our capitalistic culture insists on moving at a pace that is incredibly harmful. Our central nervous systems are wrecked by the continuous uncertainty of the pandemic, plus one traumatic event after another. Even the little things, like doing the dishes, feel overwhelming and unmanageable. It has become very obvious to me that we will not survive if we continue on in this way. I have been taking a lot of naps, eating a lot of indulgent food, and watching a lot of RuPaul’s Drag Race (a very problematic, guilty pleasure, I know).

I want to lift up the legacy of Black and Asian solidarity and a term used by one of my heroes Grace Lee Boggs that guides me and gives me hope: solutionary. Reconciling an entire white christian supremacist world rightfully feels daunting and unattainable. I witness so many organizers burn themselves out or stay spinning in spirals of unresolved rage. And while rage is righteous, rage alone won’t save us. We also need rest, resolve, laughter, and replenishment if we’re going to be in this fight together for the long haul.

To me, a solutionary approach is to find what is solvable, what is doable, what is attainable in the moment in order to remain in the movement. It’s also employing our innovation and creativity and trusting that change is possible, and that we have everything we need within us and around us to dismantle oppression and build a new world.

I have learned that I feel the most empowered when I take responsibility for my own actions, my own rest, and my own energy. I am further empowered when I believe that my participation in my community is important. And that I am where I am today because I am part of a collective. We have to believe these things; these must be our inherent truths. And we must become unshakeable in these beliefs.

At Soulforce, we have never shied away from confronting hate and harm head on. And in my personal life, I know that I am most available to provide support and fight back when I am grounded and well-rested. This isn’t always the case; I’m definitely guilty of not drinking enough water, doom scrolling, and coping in many other non-generative ways. But if I travel down that route too far, I instinctually begin to feel as though I have lost my way. I am called to do much more in the world than witness life happening around me through twitter or the tv screen. I am called to be very active in the overthrow of that which keeps us from being free.

I feel very in alignment with Soulforce’s charge to face oppression head on, and I believe naming the sources of harm clearly and unapologetically is a central strategy to our healing.

There is no question that white Christian supremacist rhetoric and purity culture emboldened the shooter in Atlanta to do what he did. The united states’ legacies of imperialism, xenophobia, and stigmatization of sex workers made the gunman feel like murder was a perfectly logical and morally justifiable action because Asian women, whether actual or perceived participants in sex work, were a ‘temptation’ that needed to be ‘eliminated.’

This is heart wrenching. How do we reconcile a world where a white guy having a ‘bad day’ feels justified to murder eight people because he felt sexually tempted and repressed? (A lot of deep breaths, punching pillows, and screaming into the void to start.) Because how do you undo such deep seeded messages of hatred and entitlement? It honestly feels like too much.

We have to name the sources of harm clearly and unapologetically. Whenever there is a mass shooting, many politicians respond with this is ‘unamerican.’ And that really makes me laugh. How can we say that a country that was founded on the enslavement of Africans and the genocide of Indigenous people is any different than what it built itself on?

Although particularly insidious and shameful in its current iteration, exemplified by the numerous extremists who have made it into public office and the slew of bills attacking trans youth proposed this year, we have to remember that White Christian Supremacy is behaving this way because it’s fighting for its survival. This also means we’re making progress and the opposition is scared. As overwhelming as everything can feel right now, we have to remember that we have more tools of resistance available to us than ever.

There’s a line a in a gorgeous video poem entitled “What came first, the fear or the virus?” by Jenevieve Ting & Jensen Reyes that states:

We are far more equipped to defeat the systems of oppression that plague our world than the fear-mongering tactics of the opposition would have us believe.

White supremacy lies to us all. It divides and dehumanizes. White supremacy will tell us that it’s Black and Brown communities that are tearing each other apart and that we are ‘the violent threats of the world’ that need to be eliminated but in reality, it’s all of us (Black, Indigenous, Latinx, Asian, AND white) that have the capacity to build and organize together to defeat the actual threat of white supremacy.

Solidarity is our strength. I wrote a haiku that goes:

lies to white people too, says,

‘this is what white is.’

I have been devastated by every mass shooting and police killing that has happened. I don’t need to be Black, disabled, Jewish, Latinx, or a family member of a gunned down child to grieve the loss of those lives.

We should be seeing ourselves, our humanity in each other, and not in a way that is toxically positive or imposing, but one that is deeply connected and reverent of each other. White Christian supremacy will tell us that dominance, hierarchy, and suffering are the only way humans can exist. But we know this is a treacherous lie.

There is room for all of us. There is space for your humanity and mine. Healing and transformation is possible. And there is plenty of time to rest and take care of ourselves and each other so we have the collective will to keep going and create a different world.

I will close with two other lines from the poem I mentioned earlier by Jenevieve Ting & Jensen Reyes:

“…we belong everywhere and we are the living embodiment of a thousand deaths and rebirths, shaped into a body that is still fighting to find a home.”

If you are in need of support or if you’re looking for ways to be in solidarity with Asian Pacific Islander communities, here are few resources I recommend: