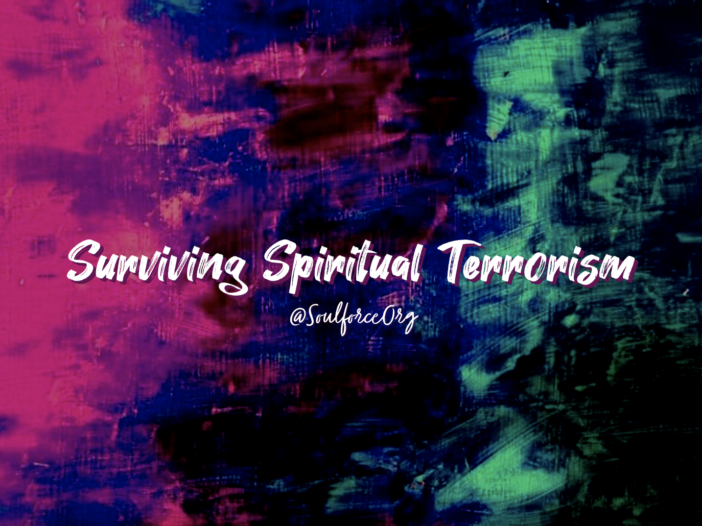 In this moment, when so many of us are fighting death, running in fear, and quickly becoming exhausted and numb, it is essential to our survival that we name what we know.

We are at war.

So many of us who are not straight, white, rich, male and/or Christian find ourselves on an unanticipated battlefield in our own home; the ammunition is live and the consequences deadly.

Our bodies are engaged in mortal combat…. and so are our souls.

We are so inundated with news of the latest decrees and targets of this neo-fascist regime that we do not fully attend to the rapid fire assaults on our spirits. Beyond the endless noise of political warfare, there is a deeper crisis going unaddressed.

What is happening now is nothing short of spiritual terrorism. And if we lose ourselves in this struggle, if we let those messages of dehumanization, coercive violence, and all-consuming power eat away at our souls, then our bodies will have little left to fight for.

This is spiritual warfare, and we must resist the death that seems to be coming at us from all sides. We must do the profound internal work of keeping our spirits alive alongside the critical communal work of saving our peoples from violence.

Spiritual violence is physical violence. It propels, reinforces, and antagonizes physical violence that leads to our death. The mosque burning in Victoria, Texas just hours after the signing of the executive order for the Muslim ban is a relevant example.

A distorted and corrupt version of Christianity moralizes these attacks and reinforces the systems of domination that say it is justified and acceptable for us to be murdered in the streets, attacked in our homes, and slaughtered en masse in our spirits.

One fundamental problem is the nature of power itself. Because of Christian Supremacy, we have come to equate power with control and domination, both of which are fear driven. “God-fearing” has long been a way to describe Christians, but it is a very specific version of God, i.e. Father-God-Patriarch-Judge-King, that uses divine power to intimidate and coerce submission. This is toxic theology.

This particular political moment is not one to get lost in our hurt feelings about losing the election or the exposed reality of the depth of racism, greed, sexism and xenophobia that is present in the hearts of our countrymen. We need to understand this is war, and a struggle between death and life, not just at a legal or cultural level.

What is at stake is far more lasting than a political regime. It is the future fate of our eternal souls. Will we die on this capitalist altar of greed? Or will we save our souls and live?

There is a legacy of evil that has come to reign. It is oriented towards death and despair, and it could lead to destruction for many of us. How we fortify ourselves and our peoples to actually engage in spiritual warfare is essential.

We must train ourselves spiritually to be ready and prepared to combat these forces of evil that are encroaching on our people’s ability to live. We must resist these deaths not only in a physical way, but also in our spirits. Because these forces lead to our harm and annihilation by our own hands, as well as by the State and its allies.

So at this particular moment, it is not about combatting that power of brutality with another more brutalizing power. The nature of power as we understand it must change.

Claiming our own agency, cherishing our own power and nourishing it in our own bodies and souls is a commitment all of our freedom fighters must make.

Power over others that requires their subjugation leads straight to death for the oppressor and the oppressed. If we have learned anything from our history, I hope it is that lesson. We must now reorient ourselves to understand true power as the antithesis of fear-based domination.

May we come to know and love and grow in ourselves the omnipotent power that comes through Creator to Creation, through the earth, through our bodies, through our bloodlines and our breath, through our histories and our ancestors that leads us all toward life abundant.