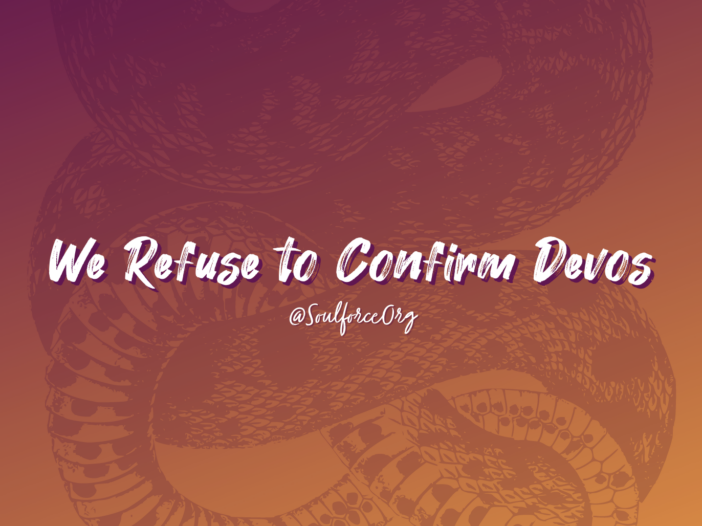 “Frankly, DeVos is an alum of my college, Calvin College, and I’m very disappointed with her appointment.”

It has been days since Betsy DeVos has been confirmed to the position of Secretary of Education in Trump’s cabinet, and our people refuse to comply.

Alongside tens of thousands of calls from around the U.S. to convince senators not to instate DeVos, protestors continue to push at every turn — for example, refusing to allow DeVos to enter the building of a D.C. school after her confirmation.

DeVos is a billionaire and graduate of Calvin College in West Michigan. Her family outspends the Koch brothers on Right Wing political causes every year – particularly focusing on Religious Right infrastructure for Christian colleges.

Students at Christian colleges in West Michigan, the homebase of the DeVos family, are similarly refusing to comply with the ideals, theologies, and structures that bolster DeVos’s wealth and power.

A letter circulating in West Michigan has collected over 700 signatures from students and alumni of Calvin College opposing DeVos’s confirmation in the past month.

Today we lift up some of the voices of LGBTQI students from West Michigan on DeVos’s appointment.

From a senior student at Calvin College in Grand Rapids, MI:

“As someone who has been spiritually violated by my college, purposefully and without purpose, Devos represents everything wrong with my college education.

“Her mother, the matriarch of the Prince Family, is one of the leading donators to anti-LGBTQIA+ orgs. Her brother is a war monger.

“I don’t know what I am going to do this year, as a student again, to take care of myself at a place that has “borne a degree” for this woman.

“The only political org that Calvin has, besides Student Senate, is the Calvin Republicans who invite the likes of white supremacists on campus, under the guise of learning constitutional freedoms!

“Must I go back to school to organize and then let my education go by the wayside again?”

From a junior student at Hope College in Holland, MI:

“Betsy Devos represents the interests of the billionaire class at the expense of low income families.

“Her confirmation is one step towards consolidating an oligarchy of elites with personal ties to Trump, which poses a dangerous threat to the American public.

“Her history of activism against public schooling serves to advance the agenda of the Religious Right, and her complete ineptitude on issues of national education is cause for grave concern.

“When thousands at your alma mater, and hundreds of students at the school your children attend, join together in protest against your position, maybe it is time to reevaluate your life’s direction.”

Youth in West Michigan understand the link between the DeVos family and their schools’ complicity in violence against LGBTQI students, shrinking social services, and gentrification in their communities.

Together, students in West Michigan have developed relationships and ideas that build the backbone for national campus organizing strategies at large.

Through tactics like the Kudzu newsletter, a student-led GiveBackIX campaign, and the Southern-regional Beyond Equality Ride in 2016, we work Youth-to-Youth to provide students with the critical resources, tools, strategies, and back-up they need to make bold stances.

To learn more on resistance against the ways that Christian colleges consolidate Right-Wing power, visit our website and support Youth organizing on our campuses.