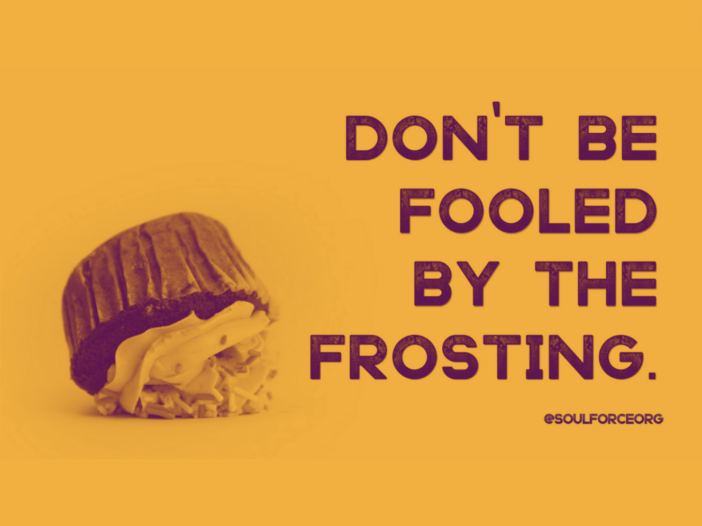 There is something inherently joyful about the sight and smell of cupcakes, isn’t there? The moment you see them you can’t help but think of happy memories, innocence, and times of celebration.

It’s in this positive connotation of cupcakes that the Right has cloaked their messages of white Christian Supremacy.

October 9th is National Cupcake Day, a day when the anti-abortion movement organizes events nationwide to propagate their worldview on consent, pregnancy, and reproductive health. One prominent group, Cupcakes for Life, encourages children from middle and high school to give out cupcakes to honor “the birthdays of the babies that were never born”.

The rhetorical strategy behind the use of cupcakes is that they serve as a non-confrontational way to spread their “pro-life” message. Though this sort of event may seem harmless to most, there is a deeper ideological problem that exists underneath those layers of icing.

National Cupcake Day leaves a bad taste in our mouths – as do similar events such as the March for Life and 40 Days for Life – because they paint their movements as morally righteous, associated with the parts of our culture that value innocence, childhood, and life. This strategy has been a successful one for the anti-abortion movement, as their messaging claims a benign, moralistic high-ground. It appeals to a sense of justice that calls on us to defend life.

But we know that pro-life narratives are heavily rooted in racism, xenophobia, and misogyny. In understanding the history and implications of these narratives we can further observe the violent ideologies that still exist within these ideologies today.

Looking back to the 19th century – a period of time when abortion was largely unregulated – abortion in the United States was a reproductive health option that was available to women of every race and class status. The ability of women to get these procedures would become a great concern to patriarchal power structures. The United States would go on to experience many waves of immigration throughout the century, and the backlash to this migration moment inadvertently created the perfect conditions for patriarchy and xenophobia to mold the pro-life movement.

The primary concern of abortion to white men during this time were two-fold: bodily autonomy of women and immigration. White men were highly concerned with women’s ability to have bodily autonomy interfering with the patriarchal duties of bearing and raising children. Then with the large influx of immigrants, continuing abortions at high rates would mean white people becoming the minority. These fears were used by the American Medical Association as the rallying force behind abortion regulations. The AMA was founded in 1847, and historically prevented Black doctors from joining their association on the basis of race and also because many Black doctors came from schools that admitted women. This led Black doctors to form a separate association: the National Medical Association.

The formation of the American Medical Association and their partnership with legislative powers in the United States allowed for the monopolization of women’s bodies. With this monopoly on women’s health came the necessity for eliminating potential competitors. Immediately Black women were driven out of women’s health services and their fields of expertise, namely midwifery, were blocked from participating in the medical field. The existence of midwifery was a threat to the patriarchal dominance white men had within the field of childbirth. The reason for targeting midwives specifically was because midwifery was dominated by Black and Indigenous midwives. In the 20th century, Dr. Joseph DeLee, a preeminent 20th century obstetrician, would address in a 1915 speech titled “Progress Toward Ideal Obstetrics”:

“The midwife is a relic of barbarism. In civilized countries the midwife is wrong, has always been wrong. The midwife has been a drag on the progress of the science and art of obstetrics. Her existence stunts the one and degrades the other. For many centuries she perverted obstetrics from obtaining any standing at all among the science of medicine. Even after midwifery was practiced by some of the most brilliant men in the profession, such practice was held opprobrious and degraded.”

At the core of these attacks against Black and Indigenous midwives was the desire for white supremacy to dominate the practices of obstetrics.

The pro-life movement would maintain its racist ideologies past the 19th century and into the Civil Rights era. In a time where our movements were winning, and public services like schools were being integrated by force of law and segregationist theologies fell out of mainstream popularity, white conservative Christians needed an issue to organize voters around that would sustain their white supremacist political interests, but still preserve their sense of moral high ground.

The founders of the Religious Right political movement found that abortion tested better than any other social issue as a hot-button topic that galvanized small groups of evangelicals to become politically active, and set out on an ideological campaign to popularly radicalize the subject of abortion and liken the Roe v. Wade ruling – which had been law for five years prior to this campaign – to “moral decay”. By the end of their campaign, they had organized a new “Moral Majority” around outlawing/criminalizing abortion, and the popular theological tides turned to support this anti-abortion, anti-choice stance of the so-called “New Right”.

Today the pro-life movement still exists as a vehicle for the sustainment of white Christian Supremacy. It simply hides itself in cupcakes and other benign symbols. It’s in reflecting on this history that we are able to see how the evangelical position on immigration, border security, and the cutting of food assistance programs are in direct contradiction to the idea of a “pro-life” society.

At the end of the day, reproductive justice isn’t just about abortion. It’s about the ability of all people to maintain agency over their own lives. It’s about valuing the entirety of one’s life, not just the nine months of gestation. It’s about access to healthcare for all people.

Though events such as National Cupcake Day and the March for Life are designed to appear non-confrontational, the history of these groups paints an entirely different picture for People of Color, Women, and immigrants. It’s when we acknowledge these histories that we are able to have honest conversations with one another about the impact of white Christian Supremacy in our lives. We can’t afford to sugarcoat oppression with the use of cupcakes.

“The Real Origins of the Religious Right,” Politico. https://www.politico.com/magazine/story/2014/05/religious-right-real-origins-107133/