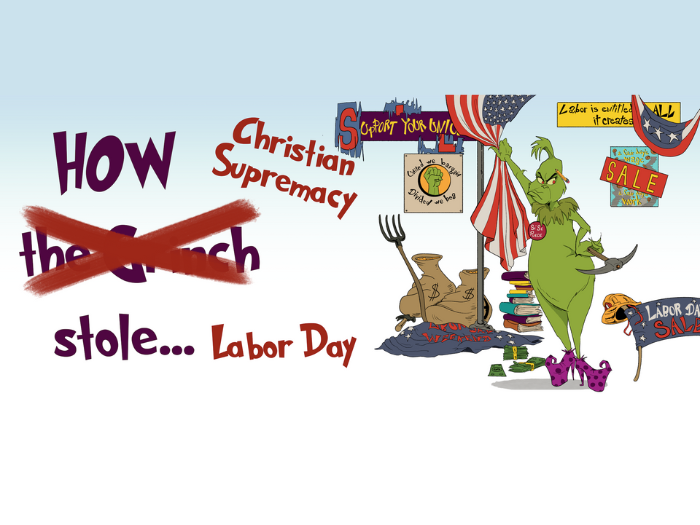 This blog post is part of a series called How white Christian Supremacy Stole…Everything, where we’ll unpack some of the sticky feelings so many of us have around some of the US’s major holidays.

The series aims to give a voice to us buzzkills who devote our lives to social justice and have a hard time not feeling like a grinch during every. Single. Holiday.

You’re not alone in your grinchiness! Understanding what is harmful about a cultural phenomenon, or what doesn’t sit right with us, can help us identify how we want to reclaim our agency and observe those holidays (or not) in alignment with our ethics and beliefs. In that way, we hope this blog post feels like spiritual accompaniment.

As workers living under the clutches of capitalist society, the feeling of alienation and hopelessness exists in nearly every aspect of our lives. We work long hours, often separated from our loved ones, with little to no reward for our labor. As we struggle to feed our families, living paycheck to paycheck, our bosses bask in the wealth that we created. For many of us we’ve been told that we must suffer righteously amidst these sorts of living conditions, and that to labor tirelessly on Earth will be rewarded in the afterlife.

The influence of capitalism on the modern church has had dire implications for the whole of human society. When we look at the question of labor and the theological perspectives on the labor movement, it’s clear to see that for white Christian Supremacy organized labor is something to fear. But why is this? For white Christian Supremacy, organized labor is a direct challenge to their existing power structures. In the modern world, the logic of capitalism pervades every social institution, including the Church. In order to deconstruct the weaponization of these extractive theologies, we must tackle the question of labor and allow dispossessed workers to know that labor is a sacred vocation.

Capitalism is built on the foundations of class domination.  This is to say that capitalism and the endless pursuit of profit requires exploitation and extraction to achieve its goals.  In not paying workers fair and just wages and extracting labor and resources from colonized countries, capitalism is able to accumulate vast amounts of wealth that will never be in the possession of those who labored for it.  I believe capitalism would not be able to maintain its hegemonic cultural control in this country without the Church distorting theology to justify this level of widespread exploitation.  In the United States, the Church has been the main moralizing force that justified all capitalist efforts to colonize the land, condone enslavement that built this country’s infrastructure, and export values to other countries for economic benefit under imperialism. It’s here that we see how theology is weaponized to pacify movements of organized labor for the sake of the exploiter classes’ benefit.

Capitalist theology teaches us to believe that we must be submissive to the institutions that deprive us of just wages and tells us that mobilizing against economic injustice is contrary to the will of God. In Ephesians 6:5 we read how slaves are to obey their earthly masters with respect. In order to follow this theological narrative, capitalist theology ignores away the concept of humans being created in the divine image and instead prioritizes the idea that some humans are mere commodities to be used and discarded. This is hypocrisy: you can’t claim to be life affirming while simultaneously reinforcing the narrative that workers are required to work themselves to death.

When we examine where these sorts of theologies are developed and taught, it’s unsurprising that they are primarily exported from imperialist countries. When we turn to theologies of exploited and colonized peoples, we are introduced to an entirely different way of viewing scripture. The advent of liberatory theologies are rooted in the socio-economic struggles of Latin America, and from those material conditions came the necessity of affirming social justice through developing revolutionary theological narratives.

The development of Liberation Theology among colonized peoples has been a direct result of the economic oppression exerted on those communities by imperial powers. For places such as Latin America, questions of labor and calls for social justice were a matter of life or death. The implications of organized labor weren’t theoretical, rather they were practical questions that the church would have to answer to protect the sanctity of human life. It’s here that labor becomes inherently revolutionary and undeniably sacred as a necessary vocation. On this Labor Day we should celebrate not only the victories of the international labor movement, but also the sacredness of labor and the call on our lives to affirm the sanctity of life through revolutionary labor struggle.

So what does labor as a revolutionary vocation look like? Labor as a revolutionary vocation is the commitment to standing beside all workers in their struggle for spiritual and economic justice. To do this requires us to recognize not only the socio-economic dimensions of their labor, but also the spiritual ones. Labor is the way in which humanity exerts our creative potential and provides for our families. Laborers are the creators of seemingly impossible things: from skyscrapers to new innovative technologies, society wouldn’t function without us.

The idea that work is inherently undesirable is a narrative that exists as a result of capitalist economics. Labor becomes undesirable only when it’s reduced to an oppressive means of acquiring wealth for the wealthy few. When we deny workers the ability to reap the benefits of their labor, we deny them the ability to live a fulfilled life as the divine intended. When we recognize labor as a vocation we are recognizing workers as co creators in the continued expansion of creation. Labor resistance means reclaiming labor as something inherently meaningful. Without organized labor, without the continued struggles of workers throughout the course of modern history there would be no Labor Day.

So on this Labor Day we reflect on the countless workers who’ve struggled tirelessly for economic justice. In reflecting on this struggle we think back to the words of Gustavo Gutiérrez, the father of Liberation Theology who said, “In the final analysis, poverty means death: lack of food and housing, the inability to attend properly to health and education needs, the exploitation of workers, permanent unemployment, the lack of respect for one’s human dignity, and unjust limitations placed on personal freedom in the areas of self-expression, politics, and religion.”. The economic oppression of capitalist-induced poverty has intersections with all social struggles within society. To advocate for workers, to struggle against exploitative relationships that exist within class society remains a sacred duty. In advocating for workers, in celebrating their victories and sharing in their sufferings, we are able to affirm their dignity and proclaim that the means to a fulfilled life should be available to all.