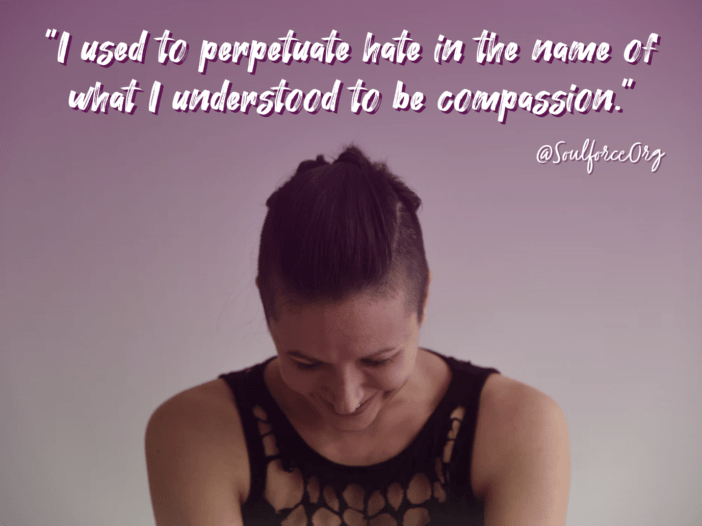 Until about ten years ago, I perpetuated hate–specifically especially homophobia and transphobia–in the name of what I understood to be compassion. I used to espouse a version of love that could  “love the sinner, not the sin”- I understood queerness and transness not as identities but as addictions to be overcome. I used to believe that who we are in our genders and orientations could not possibly be a source of pride, let alone a source of joy + love + fulfillment, and the latter collection of things is what I deeply wanted/want for everyone in the world!

There was a very real transformation that happened within myself, one that was the fruit of a very real compassion in me that I believe exists in others, too. That compassion and welcoming were always there, it was just that I once had a more limited understanding of how to channel them and a much much much more limited understanding of how aspects of my faith were tied to ideologies and structures that perpetuate systemic oppression.

A few years ago, after I came out to someone from my family of origin who loves me a lot, she said, “You know, I just really hoped that things would be… simpler for you. There’s a certain way that God wants family and gender to work that really works for me and makes a lot of people I know very happy, and because I love you so much, I want that for you more than anything.” The message that has been echoed to me a lot is: any version of romantic/sexual love that goes beyond one cis man and one cis woman for life, any identity that veers from expected gender norms or family shapes, any of this doesn’t make someone unwelcome at church or unworthy of God’s love, but it does mean they are “well… … …just not God’s ideal”.

I heard her telling me her truth from her experience, and I also appreciate that she was open to hearing me when I said that her version of “simple” simply wasn’t simple or obvious for so many, including me. I shared that for myself, for many many folks I know personally, and for many many many folks beyond that, her version of a God-ordained “ideal” that was “simpler” perpetuates an ingrained sense of fundamental unworthiness and missing the mark. It perpetuates a deep fear, hatred, and erasure of LGBTQI folks. I expressed that to her that she may not mean badly by holding those beliefs, but that those beliefs are tied to the condoning and perpetuation of very real violence.

It’s no secret that in the States, over a quarter of trans kids attempt suicide, more than 40% of homeless teens are LGBTQ (all of these statistics are far far heavier for folks who are not White), violence against trans women (especially transwomen of color) is through the roof, and you all know the dire statistics around so-called conversion therapy and so on and so on and heartbreakingly so on.

Which brings me to:

The National Religious Broadcasters Network the loudest mouthpiece globally for the U.S. Christian Right Wing’s anti-LGBTQI, anti-Muslim, and anti-Woman rhetoric. Their shows are broadcast to over 25 million homes per day.

This 73-year-old organization released an updated statement of faith last year, the majority of which is dedicated to their positions on mandating the “simpler” versions of what they believe is capital-“R”-Right about our bodies and our love and our desire.

Furthermore, they state that the Board of Directors of the NRB are the capital-“A”-Authority in terms of interpretation around those things.

These beliefs and statements are NOT harmless. Believing that core aspects of someone’s identity are “just not God’s ideal” opens the door wide to looking the other way when kids bully other kids for not fitting into that “simpler” frame, and to actively fighting (or just as bad, trying to be “neutral” on this violent moving train) against rights/protections around basic human needs like housing and healthcare, etc, etc, etc. The violence goes far beyond queer and trans folks too!!! To quote Soulforce: “[The NRB] spreads pervasive messaging which denies the humanity and divinity of our queer, trans, intersex, immigrant, Muslim, Black, and otherwise marginalized families.”

I’m focusing on queer and trans folks here because that is the arena in which I, personally, have done the biggest 180. And since I underwent such a big shift, I have to believe that, within and/or outside of any faith tradition, that kind of expansion is possible for others, too. I was liberated by this, and now I am continually gradually liberated by the ways society is opening to be able to hold more of me and more of us.

Something I dig about Jesus, in my own understanding of him, is that if he existed, he embodied radical compassion and “radical wonder and radical welcoming” (which is a phrase by badass trans thought leader Kate Bornstein).

Looking at the world right now, I am aware of how very far there is to go in terms of compassion and wonder and welcoming. I am often terrified and overwhelmed. I don’t have many answers or the right ways to say things, and I have so very much growing and learning to do, in all the ways.

Queer and trans kids, queer and trans adults, queer and trans elders, I see you, I love you, I will relentlessly keep on fighting for your rights and for a culture that radically welcomes all of who you are, and I will proclaim your humanity and divinity and worthiness and gorgeousness – during our time in Orlando, with Soulforce and beyond.

If you want, you can read more about the defiantly prayerful vigil we have held for all 86 hours of the National Religious Broadcasters conference in Orlando – around a Living Altar of Resistance that remembers our dead and fights like hell for the living – for all who are targeted by Christian Right communications. And for those who do not already know about the great work Soulforce is doing in general, check us out and sign up for the mailing list!

ORION JOHNSTONE ​is a queer, non-binary, human/composer/organizer with a ferocious commitment to our collective liberation.  Learn more at www.orionjohnstone.com.